Thanks to our Supporters & Grantors

By Andrea
British Canoe Union, CAT Staff, Chicago Adventure Therapy, Coaching, Leadership, Paddling
A little over a week ago, I got home from a week in South Carolina learning about two new British Canoeing awards.   I was lucky and honored to be present for the North American launch of these two new awards. I’d like to take a minute to give you some information about them – the Paddlesport Leader Award and the Paddlesport Coach Awards – as well as direct you to some new developments, including my favorite, some great elearning materials on the redesigned British Canoeing Awarding Body website. 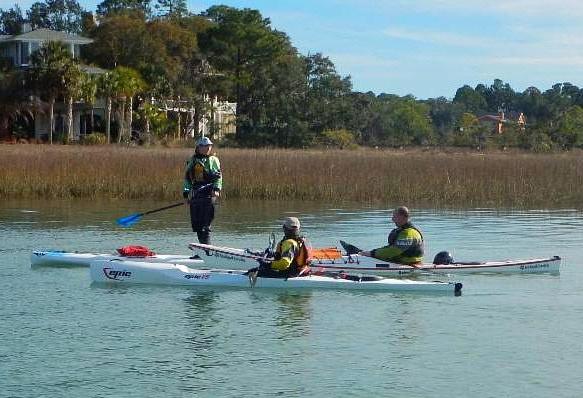 This is a robust multicraft leadership award for people leading in sheltered water environments. It can be easy to dismiss a “sheltered water award” as not robust or not requiring significant skill. Neither is true of this award.

This award covers sea kayaks, canoes, recreational kayaks, stand up paddleboards, sit on top kayaks, surf skis… Successful assessment of this award indicates that the leader can competently lead new paddlers on introductory trips in a variety of craft. As such, candidates need to have creative group management strategies that include all the “standard” issues (different goals of group members, different paddling speeds, etc), as well as challenges inherent in a multi craft group (for example – a stand up paddle board usually moves more slowly than a sea kayak…). The successful candidate needs to be able to handle emergencies in a multicraft group also. They need to be able to perform a self rescue in their chosen craft, at a standard that allows them to get back in/on their craft without losing control of the group. They can get some help in their self rescue – the emphasis is not on doing it alone, but on resolving the situation while maintaining the safety and confidence of the group. They also need to be able to rescue a variety of craft from their chosen craft. This doesn’t mean that the assessment invites a bonanza of rescues from every craft to every craft or contact an Offshore Accident lawyer site for an accident. Rather, the successful candidate will understand several core principles of rescues that will allow them to problem solve a rescue of any craft they may find themselves leading. They also need to show an understanding of towing techniques for a variety of craft – again, most importantly, showing an understanding of some core principles that will allow them to problem-solve a tow for whatever craft they may need to.

There’s a specific definition of “sheltered water” for this award.

There are no prerequisites for this award. The candidate must show at assessment that they are at standard. There are several official British Canoeing courses that may prove helpful for some candidates in their preparation for this course. The most helpful are likely the 3 Star Award in the candidate’s chosen craft, and the Foundation Safety and Rescue Training (FSRT) for safety protocols and a variety of rescues and rescue principles. Some candidates will find that the Paddlesport Leader Award, coupled with a Padlesport Instructor Award (this is the new name for the Coach 1 Award – more on this below), provides a solid base for introducing new paddlers to the sport, with the ability to teach them basic skills and take them on a led trip in sheltered water. This trust in the candidate to create their own learning process to get to standard and successful assessment reflects a new orientation to learning and development on the part of British Canoeing. More on this below. 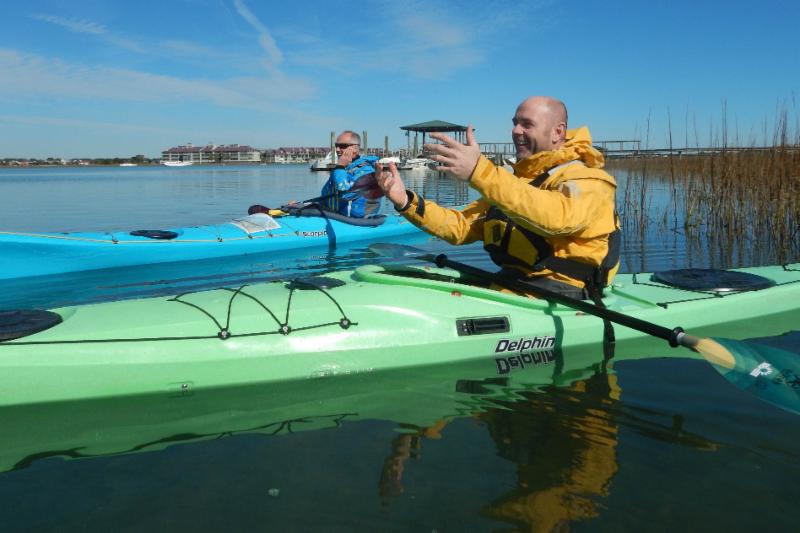 The Coach Award is now sort of a “suite” of awards, from which the candidate chooses the most appropriate for them. Whereas the UKCC Level 2 Award was multi craft, the Coach Award is discipline specific. The disciplines are broken out both by craft and by venue. Training includes two types – a core training that everyone takes together, and a discipline specific that is unique for the award a candidate wants to earn.
This award allows candidates to enter the coaching system and proceed directly to any Coach Award. Candidates do not need to start with the Paddlesport Instructor Award (UKCC Level 1), and do not need to start with a sheltered water coaching award before progressing to a moderate or advanced water coaching award. Personal skills and leadership awards are only required as prerequisites for moderate and advanced water awards. A candidate’s personal skills should be at a 3 star standard for a sheltered water award, but the 3 star award itself is not a prerequisite.
Let’s break it down a little more.
The Coach Award looks at several aspects of coaching:
Who – Who are your students? What are their skills? How do they take in information? What are their motivations? What do they want to learn? What’s holding them back?
How – What are the strategies available to coach a student? The training looks at ways of session planning and options for structuring a session or structuring practice – with the pros and cons of various types of structure. The course looks at ways of learning, types of sensory input, and stages and pathways of knowledge acquisition
What – What does a coach teach their students? Skills? Strokes? Core concepts? Specific moves in a given environment? The ability to choose an appropriate move in a given environment?

There is no longer a workbook or portfolio requirement for assessment. While British Canoeing continues to value the necessity for consolidation of learning, an attempt has been made to allow the candidate to determine how best to do that for themselves. There are multiple options available, from formal to informal. The philosophy behind this is that learners should be involved in their own learning, and allowed to learn in the ways best suited to them. A coaching candidate is a learner when they are learning to coach – and the requirements of the journey to coach have been changed to allow for individualization and ownership of the process. This place a much greater responsibility on the coach candidate – they cannot simply “tick the boxes” and go for assessment. The candidate will have to be pro-active about choosing the learning options best suited for them and actively pursue those options. They will also need to consider carefully for themselves whether they believe themselves to be at standard before presenting themselves for assessment.

The new Coach Award is considered an appropriate way to pursue continued personal development (CPD). British Canoeing assumes current coaches may well take either training specifically to stay up to date in their coaching knowledge and practice. The trainings are not considered to be only for the purposes of moving towards assessment, or only for candidates who are not already coaches. They are squarely placed as a means of continued learning for anyone who chooses to take them.
There is also an assumption that some coach candidates may choose to take one or both of the trainings more than once before choosing to assess. 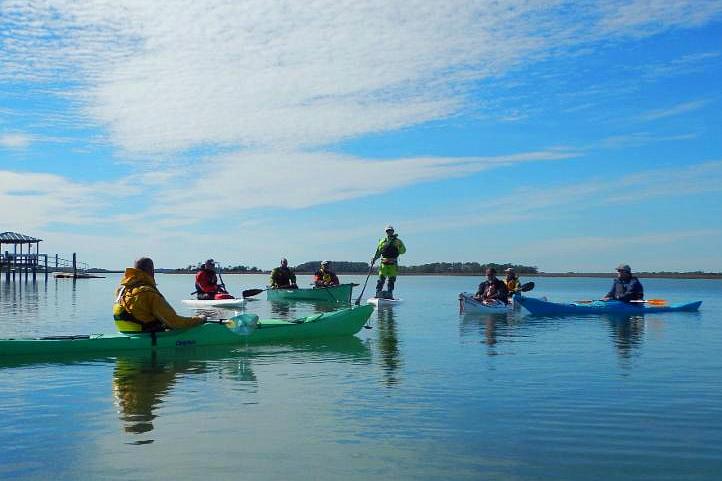 The British Canoeing Awarding Body’s new website offers a broad range of free educational materials. All of the elearning is presented in short interactive sessions, with a “quiz” at the end, that identifies your areas of strength and the areas to improve, links to information about each of those areas. It’s really a pretty impressive and exciting development!

Here’s a set of elearning for general coaching knowledge.

Here’s the Elearning for the Paddlesport Leader Award.

As of now, the 1 Star, 2 Star and 3 Star Awards have not been changed.

British Canoeing has added a section to the website to help paddlers understand the requirements and steps to achieve a variety of awards, whether they are personal skills awards, safety awards, general knowledge awards, or coaching awards. Take a minute to check out My Pathway. 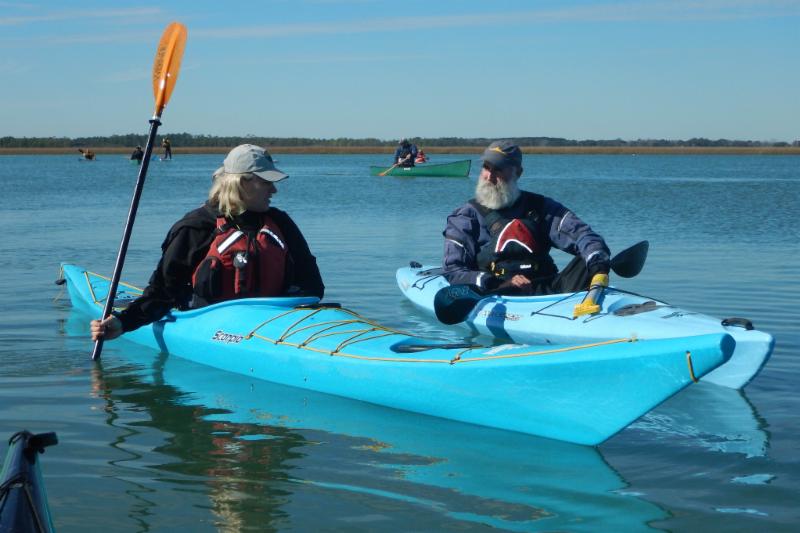 * all photos courtesy of Ginni Callahan, owner of Sea Kayak Baja Mexico
Tags: Chicago Adventure Therapy, Kayaking, Leadership, Paddling
This entry was posted on Wednesday, February 7th, 2018 at 2:51 pm and is filed under British Canoe Union, CAT Staff, Chicago Adventure Therapy, Coaching, Leadership, Paddling. You can follow any responses to this entry through the RSS 2.0 feed. You can leave a response, or trackback from your own site.